We all know the British economy is in bad shape. Opinions vary as to what is going wrong, and who is to blame. It could be Britain is not investing enough in growth. It could be that Britain is spending too much on public services, and needs to cut back, to deal with debt. Or it could be that houses cost too much.

Yeah, I know you never hear politicians arguing that last point. That argument comes from me. Politicians keep wanting to argue the first two, instead. But as with the Iraq War, nothing stops both Labour and the Tories from both being wrong at the same time. The problem with a bipolar political system is that opposing wrong-headed policies with even more wrong-headed policies will never lead to right-headed policies. At least the Lib Dems opposed the Iraq War, not that voters thanked them at the subsequent election. Now the Lib Dems are in a coalition government, the public has no hope of finding a coherent political force that will actually explain how housing policy is crippling the UK economy.

For the vast majority of people, the most expensive purchase they make is buying their house. They may spend decades paying off the loan. Think about that for a second. Whatever people do for a living, whether teaching, or nursing, or writing software or driving taxis, they spend most of their money on housing. The availability of housing, and the cost of housing, has the single biggest impact on the economy. It affects everybody. So why do politicians talk so little about housing, when they talk so much about the economy? The reason is that Britain’s mainstream parties have all messed up the economy by incompetent housing policies. The results have hobbled the economy. That is why politicians will talk about anything else, rather than talk about housing.

When I say that politicians messed up housing, I should say that their success or failure depends on your point of view. If you are now much wealthier, not as a result of working, but as a result of foolish housing policies, you might feel pretty good about those policies. A lot of Brits are richer because of the housing policies of both Labour, and the Tories before them. Houses rose in value, making people richer, without necessitating any real work. Hoorah for them. Bugger everybody who finds themselves spending more, borrowing more, and working longer, just to get on to the housing ladder. But when the economy hit trouble, suddenly a lot of owners were threatened by negative equity, as house prices fell but their mortgages remained the same. So the government has done everything possible to avoid negative equity, leaning on ‘evil’ banks and pumping loose money into the economy, to avoid foreclosures and a house price collapse. However, a price collapse would be ideal, in many ways. Bubbles naturally end with bursts. Bursting the bubble would mean a return to sane pricing. If houses were more affordable, more money could be spent on things that are genuinely productive, and will help the economy grow. For a healthy economy, it would be better if we spent less on our houses, and more on the things that generate economic productivity – cars and trains to get people to work, machines and tools for when they get there. Instead, we keep pouring money into housing.

Even an ignorant politician knows the influence of housing on the economy. Consider how MPs invest their own money (and our money). The expenses scandal revealed that MPs engaged in housing-related scams more than any others. They abused public money to purchase houses, and they abused tax rules to avoid paying for the capital gains on the houses they bought.

Spending more on houses cannot make the UK a more competitive nation, especially the way Britain has done it. The UK economy conspires to spend more on housing, even though it keeps building fewer houses. That increased spending is the flipside to the huge rise in property values. So whilst Ed Miliband sympathizes with the ‘squeezed middle’, he might want to ponder how much profit was made by middle-class homeowners over the last two decades. Without the cushion of that housing bubble beneath them, the squeezed middle would have felt a lot more squeezed, a lot sooner than now. And somebody had to pay the price for subsidizing the ‘squeezed middle’. The people who suffered most were not in the middle. The skewed housing market has placed most burden on those in private sector rented accommodation, who have suffered soaring rents, and first-time buyers, who have had to save more and borrow more, before they could join the house-owning fun. Many people endured the double squeeze of high rents and crazy purchase prices, just to enjoy the lifestyle of the ‘squeezed middle’.

So far, I have avoided numbers, because they are boring. But without numbers you may not believe me. So here is a graph, derived from the figures in the ‘blue books’ published by the Office for National Statistics. Look at the asset values presented in table 10.2, if you want to double-check this graph. 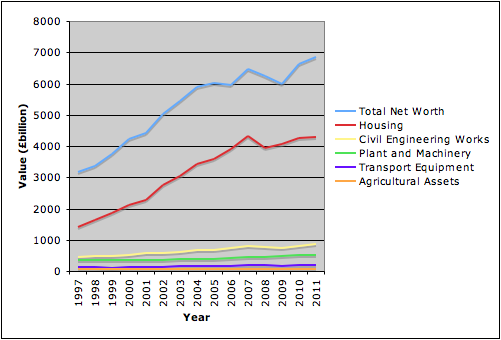 Reviewing this graph, we see that since 1997, the ‘investment’ represented by housing has tripled in value. No other class of assets – whether used in factories, agriculture or commerce – has doubled its total worth, and some, like those used for agriculture, have been flat. In short, Britain has devoted an increasing slice of its economy to housing, even whilst new builds have fallen dramatically. In 1997, the combined value of all housing was Â£1.4tn, which was 45% of the country’s total net worth. By 2007, before the global financial meltdown, the value of housing had risen to Â£4.3tn, over two-thirds of the country’s net worth. The big bust reversed house values briefly, but they have climbed again since, to the point where housing represents 63% of the UK’s total net worth.

Britain is addicted to a myth. The UK does not need to borrow more to invest. Britain needs to learn what ‘investment’ really means, understanding the difference between a sound and meaningful investment, and an asset bubble which the government is desperate not to burst. All other sectors of the economy continue to suffer, in order to bolster the profits of house owners. Starving the rest of the economy means less money is spent on real investment, whether it is a privately-run business ramping up production, or government building roads. By ‘investing’ in property, whilst making far fewer houses than are needed to meet the requirements of the population, Britain has succeeded in producing nothing but paper profit, mostly for those who owned houses before the bubble went out of control. Instead of investing in manufacturing, or growing more food, or launching internet start-ups, both the government and the private citizen has become complacent. Too many rely on somebody else to do the real hard work that drives an economy, and to take the economic risks implied by innovation and real investment. The housing bubble has become Britain’s most popular road to riches, even though there is nothing rational in the idea that a house should be worth more, just because it is older. Real investment is needed for sustainable economic growth, and that means diverting resources away from the insane goal of propping up excessive house prices. But no politician has the guts to say that, because they do not want to upset their middle-class, house-owning voters.