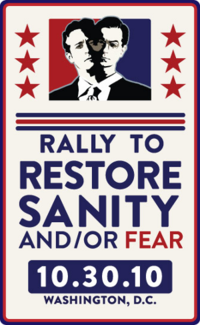 Like many distant observers of US politics, I was heartened by the Stewart-Colbert Rally for Sanity and/or Fear. These two presenters of topical comedy conspired to deliver a unique event: part-spoof of other rallies, part-statement in opposition to extremism, part-jamboree, stand-up show and rock gig, this rally did not so much stand for anything in particular, as much as it sat for everything within reason. Though unclear what else the participants agreed on, they were unified in one belief – it is okay to disagree, so long as you are moderate in how you do it. By some reports, possibly over 200,000 Americans descended on Washington D.C. to show how they feel about those who feel too much. This is quite a reverse from Nixon’s “silent majority” who repeatedly put that old conservative crook into the Whitehouse. The Tea Party’s rebels of the right have become America’s most assertively vocal minority. With all the noise they make, they may not notice they are outnumbered. The Rally for Sanity demonstrated just how moderate so many Americans are, as they quietly go about their lives and business, and wish everyone else would do the same.

Comedy, especially satirical comedy, is the great counterweight in any public discourse. However earnest or extreme an opinion, good comedy should pull faces from the opposing podium. Mirth brings us back to earth, and helps us find our centre, when anger or fear threaten to push us over the edge. Americaâ€™s reputation for wit was given an inestimable boost by the many hilariously conceived placards brought by the rally’s undemonstrative demonstrators. The rally website offers a sample of signs and asks the visitor: ‘sane or not’? Here are some of my favourites:

“We have nothing to fear but fear itself and spiders”

“Hyperbole is the antichrist”

“I leave binary thinking to computers”

“Signs are an impractical medium for civil discourse”

“I’m a little annoyed but I’ll get over it”

Inspired by these Saturday satirists, I hope that sanity spreads across the seas, and soon gives me the opportunity to create some sympathetic signage. I am ready for the task – and here are my own pithy placard punchlines to prove it…

“What do we want? Carefully considered action! When do we want it? In a reasonable timeframe!”

“Just say no to inflexibility”

“2-4-6-8, who do we appreciate? Anyone who expounds their beliefs in a calm, rational, and unemotive way”

“Ask not what your country can do for you, ask what time is dinner”

“Before you master debate, first love thy neighbour”

“Grey is the new black and white”