It is not science, but a comparison of two maps should be leading people to do some serious research… of a type that journalists or politicians rarely do. The map on the left shows how different regions voted in Britain’s referendum on the European Union, with the blue showing those parts that wanted Brexit. The map on the right shows the results of the latest research from the Social Mobility Commission, the non-partisan bit of government that no journalist or politician wants to draw attention to because: (1) it is non-partisan, (2) arguing for the benefits of social mobility is not as straightforward as arguing about poverty or the distribution of wealth, and (3) both of Britain’s major parties have a lousy record on social mobility. The blue on the right-hand map shows areas where social mobility is below average. Whilst the two maps are not a perfect mirror, there clearly is a relationship between social mobility and attitudes to the EU. 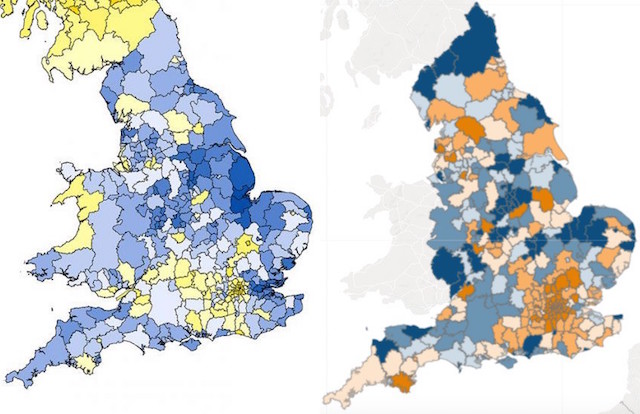 A link between social mobility and attitudes to the EU should make perfect sense: why would you care about the notional freedom to live and work in Davos, Dublin or Dubrovnik if your reality is being stuck in a dead-end job in Doncaster? But as too few of the ruling elite want to talk about the consequences of repeatedly failing to respect the aspirations of millions of Brits – largely because the elite is composed of life’s winners, who have every reason to limit the best options to their own children – then we will not talk about it in the context of Brexit either. So let us all agree to describe Brexit voters as racists or morons instead… because that is far easier than dealing with real problems that keep getting worse, and that neither politicians nor the media want to see addressed.