Hollywood moviemakers must be full of mirth. As well as having a job that many people envy, and laughing all the way to the bank, they get to indulge themselves with momentary in-jokes, so short and subtle that few viewers would ever notice them. These hidden novelties are sometimes labelled ‘easter eggs’. Here are six of the best second-long snippets of silliness you may ever find (and may well have missed).

“The name’s Branson. Sir Richard Branson…” Branson as a secret agent? Maybe not. The beardy entrepreneur chases publicity with more enthusiasm than a paparazzi-obsessed moth. Then again, Bond is the only secret service employee who announces himself as he walks into his enemy’s lair, just prior to bedding his enemy’s girl and pinching the enemy’s secret weapon. When the Casino Royale crew needed a Virgin flight at short notice, Branson negotiated himself a bit part in exchange. In the film, we see Daniel Craig’s Bond trailing a baddie through an airport. Instead of enjoying his usual VIP treatment, Branson is seen getting the security once-over… After discounting the question why Branson has time to waste on a subliminal film appearance (answer: because other people run his businesses) we can turn our attention to the serious flaws in the scene itself. A close inspection reveals Branson is allowed to keep his shoes on. Are we meant to believe that modern airport security allows a scruffy-looking guy, with straggly hair and unkempt beard, to stroll through with his loafers still on? The man should be strip searched, just to be on the safe side. Whoever wrote this scene obviously never saw the mug shots of the original shoe bomber, Branson namesake Richard Reid.

When a well-loved television show is turned into a movie, the standard marketing ploy is to give cameo roles to the original TV stars. Hence original hulk, bodybuilder Lou Ferrigno, played a pizza-munching security guard in the movie version of The Incredible Hulk, whilst David Soul and Paul Michael Glaser sold a familiar red and white Ford Torino in the remake of Starsky and Hutch. But when the original show stars puppets, and the remake is live action, how do you reference the original? The movie version of Thunderbirds was a flop, but director Jonathan Frakes found a warmly affectionate way to doff his cap to the original television series. In the TV puppet series, real people’s hands were used in close-up shots of the characters playing with dials and controlling machines. In the movie, a brief close-up shows a hand on a lever… with the hand being pulled by strings!

Con Air is the greatest film ever made, at least according to writer Toby Young’s alter ego in How To Lose Friends & Alienate People. Before Con Air, producer Jerry Bruckheimer had delivered the mega-grossing hit The Rock. The films had refined a winning formula developed over the years through blockbusters like Top Gun and Beverly Hills Cop. Stellar cast + popular soundtrack + avalanche of action + lots of comedy + insanely stupid story + not caring about the reviews = lots of money at the box office. The Rock boasted Nic Cage, Sean Connery and Ed Harris, about as heavyweight a Hollywood line-up as anybody could muster at that time. Bruckheimer’s follow-up, Con Air, had to have an even more popular cast. In fact, it had the perfect cast, according to How To Lose Friends & Alienate People…

It’s got everything, hasn’t it? You know, you’ve got Malkovich for your acting chops, you got Nicky Cage for your action, Steve Buscemi for your comedy, John Cusack for the gays. Right? It’s like a smorgasbord, isn’t it?

The moviemakers hint at what they think, giving the acerbic Malkovich a cutting line in Con Air…

Trekking from Far Far Away

There is a theory that trekkies are somehow antagonistic to fans of the Star Wars franchise. A closer look at the Star Trek movies suggests the people who make them feel no antipathy, though you have to have inhuman powers of perception to have spotted the evidence on screen. 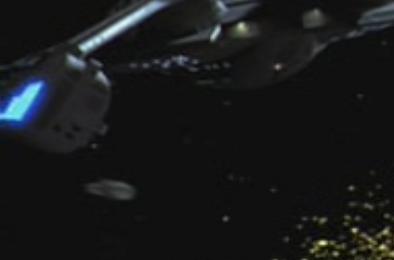 In Star Trek: First Contact (also directed by Frakes) the initial assault on the alien borg cube includes one unlikely Federation ship – the Millennium Falcon. One wonders if Han Solo and Chewbacca are at the helm.

J.J. Abrams’ 2009 reboot/restart movie, the eleventh Star Trek film, manages to smuggle in another piece of old machinery from the Star Wars Universe. The Enterprise encounters some debris in space – including one familiar robot that had been built a long time ago. R2-D2 is briefly seen on the viewscreen, whizzing through space. Poor old R2 should have been retired to the rest home for elderly robots long before. And they could have had the decency to let him end his days in the company of his grumpy old robot pal, C-3PO. 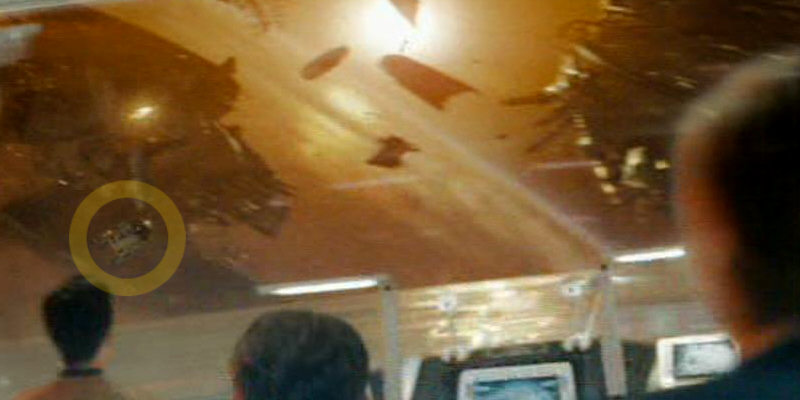 G.F. Starbuck – Dirk Benedict, who played the original ‘Faceman’ Peck in A-Team, was also Starbuck in the original Battlestar Galactica.

Perhaps Hollywood wants us all to get better value for money. To spot everything they load into a film, you have to be watching them in slow-motion, and with IMdb or Wikipedia easily to hand…