I have been wanting to tell you all something for a while, but it has been a struggle to find the way to do it…

Ezistopheles: No, No, NO! Too wimpy a start. You have to be bolder, more courageous, more confident.

Angelic Eric: Don’t listen to him, Eric. That’s a very good beginning. Humility is a virtue.

Ezistopheles: Forget false modesty. You rock! Don’t be afraid to tell them so.

Ezistopheles: Well, you’d better introduce us now, or everybody will be confused about who we are.

Okay. I suppose now you have butted in, I better had. Some of you readers may have met them previously, but for those who have not, let me introduce my two internal voices. First, there is my conscience, the ever gracious and considerate â€˜Angelic Ericâ€™…

… and then there is my inner git, ‘Ezistopheles’…

Ezistopheles: Thanks for nothing. I suppose that’s what you get for trying to do someone a favour.

They have been helping me, in their own inimitable fashion, to write today’s blog. What I wanted to tell you was…

Ezistopheles: Why don’t you show them a photo of us?

Angelic Eric: That might be rather jolly. It would also demonstrate that we’re not just figments of your deranged psyche.

I only have the one photo, and I have grown a beard since then.

Ezistopheles: They want to see us, not you.

Okay then. Here is the photo of the three of us. 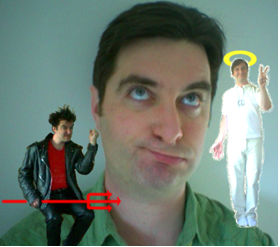 Angelic Eric: Why do always pull a face whenever someone takes a photo? You should smile more.

Ezistopheles: Never mind his ugly mug. What about telling the readers which is which in the photo. I’m the one on the left, wearing the cool leathers.

I think they could have worked that out for themselves. May we continue now?

Ezistopheles: Get on with it then.

I have been working on a script…

Ezistopheles: Is it better than this one?

Angelic Eric: It’s a lot better than this one.

Angelic Eric: Erm… not that there is anything wrong with this one. Erm… I just mean that you have spent months writing Cosmic Corridors whilst you banged this out in under an hour.

Angelic Eric: Darn. Sorry about that.

Maybe I should start again…

Ezistopheles: Come on, we’ve got this far. Let’s not prolong this agony any longer than we have to.

You are right. I have been working on a script for a half-hour radio comedy.

Angelic Eric: Tell them what it’s about.

It is about two thirty-something losers…

Ezistopheles: It’s based on a true story.

Angelic Eric: Don’t be so mean!

… who discover their house has doorways to other planets.

Angelic Eric: I’m still a teensy weensy bit worried that it sounds like it’s only for sci-fi buffs.

Well, you should not worry about that. I was going to say it is a mixture of Seinfeld, Doctor Who and the vintage Bob Hope and Bing Crosby Road movies.

Angelic Eric: You mean like Road to Morocco? I love Dorothy Lamour in those movies.

Yes, exactly, but we are wandering off the point. The doorways lead to other planets because you cannot make comedies about going to Morocco and being chased by people trying to cut your head off any more. That would be culturally insensitive to Moroccans.

Ezistopheles: But I suppose it’s okay to make fun of Venusians, is it?

Now you are just being silly.

Angelic Eric: Will there be singing, like when Bing Crosby sings ‘Moonlight Becomes You’ to Dorothy?

Yes, there will be some singing, although it is more for laughs than anything else. We actually recorded the script ourselves, so people can listen to it and hear the dialogue, music, sound effects and everything. They can listen to it over the web or download it to their mp3 player, or even subscribe via iTunes.

Angelic Eric: Who wrote the music? You may be a wonderful writer, but you don’t know one end of a keyboard from the other.

Ezistopheles: I thought the characters were also called Matt and Eric. Isn’t that a bit confusing?

I do not see why it would be confusing. Most people can tell fiction from reality without too many problems.

Ezistopheles: I was more worried about you being able to tell fiction from reality. After all, this is you having a conversation with yourself.

Angelic Eric: So if it’s not just for sci-fi buffs, where does the humour come from?

Mostly the humour relates to the bickering between the characters.

Angelic Eric: Yes he is.

We should let the audience decide whether it is funny or not.

Ezistopheles: Fair enough, but how do people listen to this so-called comedy? Sounds like it’s more of a farce, heh heh heh.

It is on the internet, at http://cosmic-corridors.com/.

Ezistopheles: Great, so what are the readers doing over here at Halfthoughts? They should be visiting Cosmic Corridors and enjoying the laugh riot of your new comedy.

Well, the website is not completely finished yet, but it seems silly to stop people from listening whilst we add a few minor final touches. So I suppose you are right, they should be over there and listening!

Ezistopheles: But you still intend to waste your time writing stuff over here at Halfthoughts, don’t you?

Yes I do, but I do not consider it a waste of time, thank you.

Angelic Eric: You forgot to mention that people should sign the guestbook at Cosmic Corridors and they should also tell all their friends to listen too.

Ezistopheles: They should tell their friends they like it even if they don’t.

Angelic Eric: That’s not very moral. They should only tell Eric they like it even if they don’t.

Ezistopheles: Let’s hope the lines come out better in Cosmic Corridors than they did just then.

I think that is that. We did it, we told the readers. What a relief.

Ezistopheles: I don’t think they understood.

Why do you say that?

Ezistopheles: Because if they understood, they’d have gone to Cosmic Corridors already, instead of still being here reading this!