Only a nation that encourages its citizens to vote for its public prosecutors and prom queens could deliver the ultimate in popularity contests. The USA is nearing the completion of another four-yearly cycle to pick its President. This is of importance to the rest of the world. As head of the greatest military power and largest economy on the planet, the US President is arguably the most powerful person alive. The influence of the US President is often greatest outside of his country, as the citizens of Iraq and Afghanistan can attest. On domestic policy, the President must negotiate and reach deals with Congress. In the realm of foreign policy, the US President is relatively unfettered. Judged by the rock star adulation he received on his recent international tour, Democrat nominee Barack Obama would be a shoe-in if the whole world could vote. But only the land of the free and the home of the popularity contest will have a vote when the Presidential election takes place on Tuesday, November 4 of this year. Overseas popularity counts for nothing. Republican nominee John McCain, who was often well behind and nearly ran out of cash at one point during the nominee race, has every reason to believe he will ride his “comeback kid” bandwagon all the way to the White House.

Obama’s popularity is rooted in the message of change. For McCain, distancing himself from an unpopular incumbent, whilst still trying to securing the support of his party and its voters in 2004 is a tricky challenge. National and international events may very likely throw an unanticipated curveball, like an overseas conflict or domestic terror attack, into the run-up to voting. If that happens, the responses of the candidates may be crucial in swinging key votes. However, it is impossible predict what will happen between now and November 4. What we can say is that the polls are currently telling us that the race is very tight, that Obama is more popular, but that McCain will win.

Yes, you read that last sentence right. Remember that the US President is selected based on a collegiate system, designed to pick leaders that have popular support all across the country, and not reliant on a dominant powerbase in a few populous regions. Each state has a number of delegates, in proportion to its population. The winner of the election is the candidate who gets most delegates. As most states allocate their delegates on an all-or-nothing basis, it does not matter if you win the votecount in a state by one vote or a landslide, as you get the same number of delegates either way. The odd exception aside, for each state the winner takes all the delegates, and the loser gets none. There is no advantage being the clear winner in one state if you are also the narrow loser in another state of equal size. So far, the poll results suggest that Obama will get more votes, by a few percentage points. See here for the averages from Real Clear Politics. However, when polls are analyzed state-by-state, the spread favours McCain, who would take more states and more delegates. Obama is on course to win by large margins in some of the biggest states, like California (55 delegates) and New York (31). McCain is ahead, if narrowly, in more states. Compared to the 2004 election between Bush and Kerry, the poll averages suggest that only the states of Iowa and New Mexico have swung from Republican to Democrat. Between them, Iowa and New Mexico represent just 12 delegates out of the total of 538 in the electoral college. In 2004, Bush beat Kerry by 286 delegates to 252, so Obama needs a total swing of 18 delegates to get the 270 he needs to become President. On current projections, he is 6 short, and McCain will win. That means he needs to take a couple more small states, or he needs one of the larger but borderline states like Ohio (20 delegates) to swap sides.

There is no rational way to analyze what makes somebody likable, but it is vital to winning an election. Many Americans liked George W. Bush. They thought he was the kind of guy they would want as a neighbour, and could talk to whilst sharing a beer. They liked Kerry less, who was seen as being remote and elitist. Many pundits have focused on the awful dilemma McCain faces. He is a relative centrist and free-thinking candidate by Republican standards, but has to hold together the core vote that got Bush into power, even though Bush’s popularity is exceptionally low. That means McCain is bogged down by association with Bush, but he cannot afford to distance himself from his former nemesis for fear that mainstream Republicans may just stay at home on election day. Obama’s message of change has been easier to make thus far. The problem with such a message, though, is that it offers the maximum hope so long as the details remain vague. As we get closer to the election date, and details need to be provided, some voters may find that the changes being offered are not the ones they wanted. There are already signs that Obama’s campaign has fallen into typical patterns that bely his emphasis on change.

Obama’s campaign carefully exploited the perceived negativity of his rival Hillary Clinton whilst landing quite a few blows of their own. Being negative is an effective way to win votes, but it may undermine the presentation of Obama as being a candidate who represents something substantially different to what has gone before. Take a look at this recent negative ad about McCain forgetting how many homes he owns.

With America in the midst of a mortgage crisis, McCain’s gaffe was a gift to his opponent. Time and again Obama’s team tries to link McCain with the unpopular and failing economic policies of Bush, whilst highlighting McCain’s personal wealth. However, the zeal with which the Obama team moves to exploit their opponent’s mistakes, only opens the door for McCain’s campaign to hit back, and hard. It simultaneously solves the problem that dogged Clinton, who was unable to successfully go on the attack for fear of being portrayed as a negative old-style politician. The more Obama attacks, the more McCain can counter-attack, bringing Obama from his lofty heights into a genuine fight, but without hurting McCain’s credibility in the process. McCain’s team has already done a good job of pointing out Obama’s suspect house purchase. In the end, Obama’s mystique, like anyone’s, disappears when seen too close. However much he represents change, the young mixed-race intellectual Obama, raised by his mother after his father abandoned them, is today a multi-millionaire lawyer enjoying a lifestyle and privileges that many supporters may aspire to, but few will ever attain. Presented like that, Obama is less a man of change and more a representation of continuity. Power will remain in the hands of a wealthy elite, even if the colour has been adjusted. Making Joe Biden his Vice-Presidential running mate, a man who criticized Obama’s lack of experience, further emphasizes the tough compromises that Obama is now having to make. Biden bolsters Obama through his experience, especially in foreign policy. Biden was a candidate for the Democrat nomination not only this year, but also back in 1988, undermining the idea that an Obama Presidency would lead to change. Biden’s 1988 bid was strong, but he was forced to bow out when he was caught not making enough changes – he copied a speech by Neil Kinnock without giving credit. Picking Biden shows Obama is a realist, and that he is trying to secure his appeal by addressing his weaknesses. It also shows that political change will not be as great as some may have hoped.

Because of the way votes are counted, McCain is in the lead in this popularity contest. He does not need to beat Obama where the Democrats are strongest, though the support of the like-minded centrist Republican Governor of California, Arnold Schwarzenegger, will probably force Obama to expend more resources than he would like in that key state. To win, McCain only needs to hold on to the states that voted Republican last time. If he does that, and the polls currently suggest he will, then he will be President. McCain may have been dubbed the “comeback kid”, but oddly it is Obama who needs to come from behind to win this race. The irony for Obama is that he is behind McCain in most of the states he won in order to beat Clinton in the Democratic primaries. Take a look at the table below, which compares the 2004 election result, the Real Clear Politics average polls between Obama and McCain, and the Democratic party nomination race between Obama and Clinton. The yellow marks those states where current polls run counter to the 2004 election result. The blue highlights those states that Obama took in the race for the Democratic party nomination, but where he trails McCain in the polls. 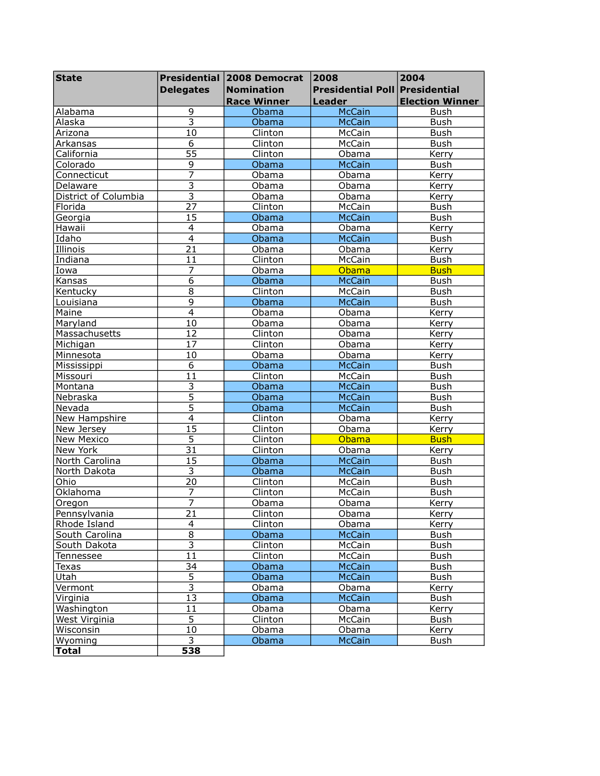 The table shows that Obama mostly beat Clinton in the states that Bush won in 2004. However, so far the polls say he has not swung those states to supporting him over McCain. You could interpret this as proof that the Democrats picked the candidate best placed to beat the Republicans. But if that is so, their candidate needs to do something extra in order to win. Far from being a front-runner, and despite his leads in the national polls, Obama has yet to find a winning formula to win the Presidential election. Finding the extra ingredient he needs for success, and incorporating it into his campaign without creating rifts in his current support, may prove a greater challenge for Obama than McCain’s relatively straightforward challenge of holding on to Bush voters from 2004. The way this popularity contest is judged, the most popular man in the world finds himself currently lagging behind.