The Bible is a popular book, no doubt about it. It may well be the most popular book of all time. Which I guess it should be, if it was written by God, by way of a little help from his friends. Popular though it is, when people say they read the Bible, they usually mean they read passages from the Bible, not the whole thing cover to cover. I may be no Christian, but when I was a teenager, I read the Bible – from cover to cover. Do not ask why. I was an odd kid. I read it, in sequence, over the course of 2 weeks, starting with Genesis and “In the beginning…” and ending with Revelation and “The grace of our Lord Jesus Christ be with you all. Amen.”. Apologies to any Jews who think I should have stopped at the end of the Old Testament.

Since reading the Bible, I have been surprised just how useful the experience was. It is not that I believe every word of the Bible is true. I have a lot of sympathy for guidance like turning the other cheek, but there are plenty of other passages that I would not trust. That said, the Bible is important. It is a bedrock that motivates and guides many people, and underpins conventional morality and behaviour in much of the world. However, reading the Bible has also taught me that a lot of people make a lot of really ridiculous claims about it. Presumably most people do not argue with these claims because they are ignorant of what the Bible says, they rationalize and agree with the claim no matter how absurd it is, or they are simply too polite. I am none of those. Take a look at this extract from an online ministry:

Even though it is really sixty-six individual books, written on three continents, in three different languages, over a period of approximately 1500 years, by more that 40 authors (who came from many walks of life), the Bible remains one unified book from beginning to end without contradiction. This unity is unique from all other books and is evidence of the divine origin of the words as God moved men in such a way that they recorded His very words.

Excuse me? The Bible does contain contradictions. Arguing that the Bible does not contain any contradictions is like suggesting that the agreements reached by a group of politicians or diplomats will always be interpreted and implemented in the same way. Clearly that is not true. In many walks of life we can find different groups of people who agree to accept the same formulation of words, such as a contract, or a law, or even a statement made in a debate, at one point in time, but later insist on taking contradictory interpretations of what the words mean. Not every nuance of meaning can be tested at the time when words are written down. Some possible meanings will only be deliberated over in response to unforeseen later challenges. In fact, sometimes the challenges are foreseen, but for pragmatic reasons we get on with writing the words and leave any ambiguities to be dealt with later on. The Bible magnifies this problem many-fold by saying so many things in so many different ways. The Christian Bible comes in two sections. In the New Testament, there is a sequence of stories where Jesus keeps telling people they misunderstood the Old Testament. Jesus was quite the diplomat. He never finds fault with the words themselves, but merely suggests people need to read them differently. In other words, the most straightforward and literal interpretation often turns out to be wrong, according to Jesus. For example, when Jesus talks about turning the other cheek, he does so in reference to the eye for an eye rule found in Exodus and elsewhere. You would have to be a pretty unreasonable person not to see how people might be confused. They read their Bible, and follow some rule about an eye for an eye, a tooth for a tooth and all that. You think it means that if somebody kicks you in the shin, then the just punishment is that they get a kick in the shin too. Then some new beardy weirdy guy shows up and says you misunderstood. He says that the rule means if somebody slaps you on the cheek you should meekly offer the other cheek for a slap, or in the case of the kicking of shins, you should roll up the other trouser leg. No wonder the Jews and Christians went their separate ways.

I am most baffled and bemused when I hear people say the Bible is the literal truth and that we should follow it word for word. Well, great, I guess that might work. At least then we would all know which rulebook to use. Sadly, there is only one flaw with that approach. We already have thousands of people in this world, all saying they follow the Bible literally, and yet all doing things that are inconsistent with one other. No amount of faith and Bible study will be enough to teach some people the difference between good and bad. Take the Westboro Baptist Church as an example. They seem to be utterly sincere and very dedicated to the literal interpretation they have taken from the Bible. This literal interpretation of the Bible, the very same Bible that everybody else has been reading, has lead them to the following conclusions:

Here is the website of the Westboro Baptist Church. Just in case anybody is confused, I am telling you what they say, and pointing you at their site so you can double-check it for yourself. I do not agree with it. That also means I do not agree with the actions of a group of people who sincerely believe they are following the instructions of God as literally communicated in the Bible. Which also explains why I find it problematic when people insist that we should all rely on a literal interpretation of the Bible. In practice, many people reach entirely different interpretations of right and wrong, even when reading the Bible literally.

Thankfully, most people do not follow the instructions in the Bible literally. If we did, the world would be an even more miserable place. Even people who say they are Christian do not follow most of the instructions in the Bible. Even the fundamentalists who insist on a literal reading do not follow all of the literal instructions. Now, at this point in arguments about the bible, it is common to bring up all passages that cause most upset and get emotions running high. In a slight deviation from that theme, let me list a few passages that either upset people, or should upset people, if they did not choose to ignore them.

Despite all the emotion sparked by Bible passages like this, or more correctly because they provoke so much emotion, I do not believe these passages are good counter-examples to treating the Bible as literal truth. Having read the Bible, cover to cover, I can assure you that a lot of it is very mundane. Mundane, and, for the modern world we live in, silly. Just silly. There are plenty of rules that may have made sense at the time and place they were written, but which would just be daft if followed now. Here are a few:

My favourite passages in the Bible describe the rules for treating mildew. Seriously. They really stuck in my memory. I guess I like them because they really are very literal, very straightforward, and very silly by modern standards. I also like them because they are pretty close to that passage about God hating male homosexuality, which rather puts things into context. People get the wrong attitude about the Bible, if they only read, or are told, some key passages and remain unaware of the rest. Let me summarize the rules that God gave Moses and Aaron about mildew in your abode. if you notice mildew in your house, take all the furniture outside and get a priest to come over and check it out. If the priest notices some green or red spots on the walls, he will come back in seven days. If the spots are still there when he gets back, then you have to tear down all the plaster from every wall, plus tear down the parts of the walls that had mildew. Once you have rebuilt, the priest will come back again in a while. If there is mildew again, the house is buggered and you have to knock the whole thing down.

There you have it: proof, as good as I can get it, that nobody follows all of the rules stated in the Bible. Some may say they follow the Bible literally, and try to make some clever points about the difference between being literal and using figures of speech. However, the rules about mildew are no figure of speech. They are as literal as can be. However, I am also extremely confident that there is not a single person alive today who would follow those rules literally. For a start, what kind of crazy priest would want to come over your house and look at mildew? And even if there was a willing priest, who would remove all their possessions from the house first? Consider also the not very ingenious solutions offered: you get to knock down part of your house if you are lucky. If the mildew persists, you knock down the whole house. I guess that means modern advice on the treatment of mildew is blasphemy. Methinks that even the most ardent fundamentalists must be conveniently ignoring some parts of the Bible.

Yup, you cannot have your cake and eat it. You cannot insist that the Bible is 100% the word of God, totally consistent, correct without exception, and to be followed literally, and then opt to ignore certain parts. People usually focus on the bits about love, or hate. Apply a broader perspective, and it is easy for a modern reader to find fault with the Bible. The Bible is full of down to earth instructions on how to deal with mundane practical problems. Guess what? The rules that were relevant to people with ancient technology, science and knowledge are no longer relevant today. Nobody would follow them any more, whether they are a good Christian or not. Breaking the rule about mildew does not make you a bad person in my eyes, and God must be a silly bugger if he plans to send you to hell for something like that. However, anyone who says they follow the whole literal truth of the Bible should be examined against their own self-imposed standards. By those standards, their credibility takes a beating for every passage in the Bible that states a mundane, but archaic, rule for practical life.

Oh well, I guess even the most god-fearing folk will err from time to time. By the looks of this picture of Westboro Baptist Church, somebody forgot to put those railings on the roof… 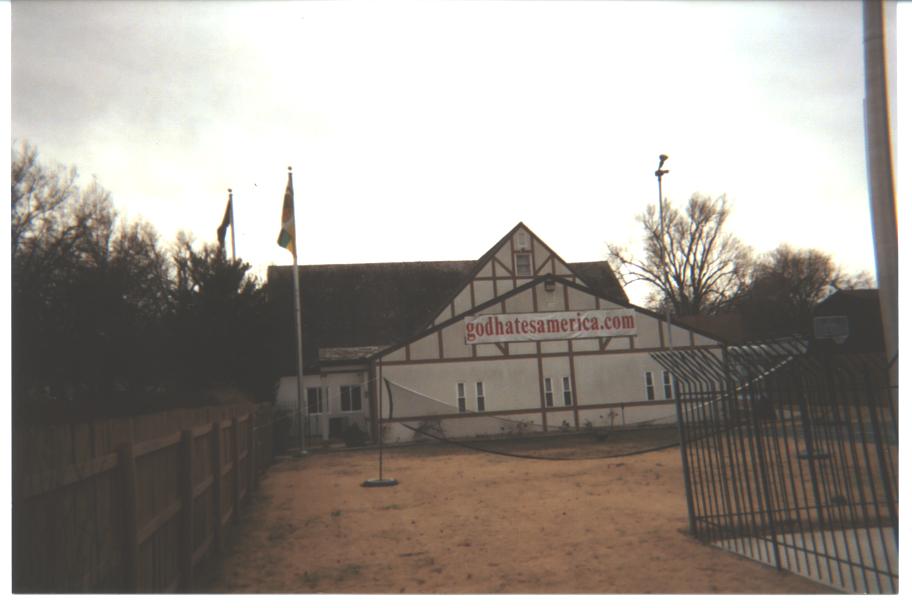