I neither buy nor believe in cosmetics because I consider all human beings to be perfectly beautiful as they are, and so I literally never heard of a business called Lush before noticing this post from UK Cop Humour. Put simply, thousands of UK police officers are understandably upset because a multi-million pound cosmetics empire thinks it wise to put dangerously divisive messages about the UK police in all their shop windows (pictured below). 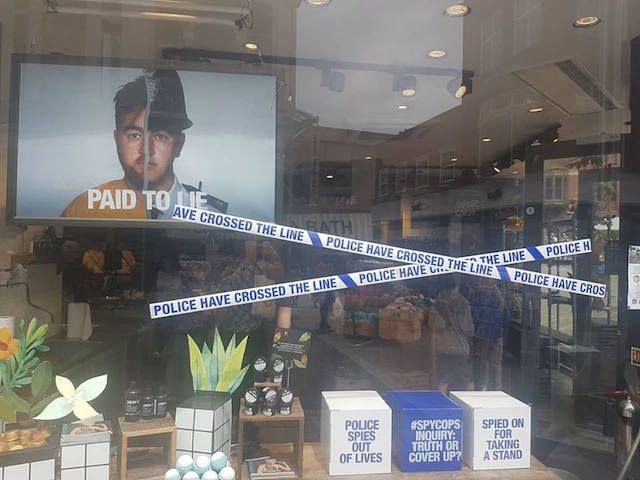 As sadly typical of our increasingly self-righteous and polarized society, Lush’s management team want to raise awareness of stuff and/or increase profits through shock marketing techniques, but they lack the good sense to restrict themselves to topics where they actually have some competence. I think the behaviour of Lush’s management team is wretched and irresponsible, even though I also agree with the goals that Lush is promoting through their ‘spycops’ campaign: that allegations of abuses by undercover police should be thoroughly investigated and prevented from happening again. Being angry at Lush for creating a marketing campaign that is so corrosive to our society, and curious about the executives who think they are entitled to behave like this, I thought I would use one of the key techniques that so-called social justice warriors like to apply to big profitable corporations they loathe. It seemed appropriate to do so; I doubt that fans of social justice are so diligent at checking the affairs of big profitable corporations that pretend to be on their side. So I looked at the accounts of Lush, as publicly filed with Companies House, and open to inspection by anybody. These are some of the things I learned about Lush, and how it is managed:

By now, you already get my point, or have tuned out because you do not want to hear the truth. Whether you consider yourself as belonging to the left or the right, there should be something troubling about a big rich business which tries to boost sales by telling people how much it cares about social justice, but whose way of conducting its own affairs is so clearly contrary to social justice.

Here are the key anti-social aspects of Lush’s business model in more detail, all gleaned from the 2017 accounts filed for various companies in the Lush group.

Lush pays Â£450,000 pa to its top director, not counting what that person also receives as dividends. This is more than 20 times the amount it pays to most of its staff, and 3 times the amount Theresa May receives as Primeminister. To put it another way, if Jeremy Corbyn becomes Primeminister he has promised to prohibit companies from allowing such a wide discrepancy between its highest and lowest paid staff.

In February 2017, Lush made a big dividend payment that broke the law (Companies Act 2006). Per their explanation of why they broke the law, the Lush group includes so many legal entities in so many countries that they simply lost track of how they were moving money around from one place to another, and so announced a dividend payment from a company that had not actually generated enough profit to legally permit that scale of payment.

Lush’s international group uses royalties as a way to move profit from high-tax countries to the UK, which is a relatively low-tax country. This lowers the amount of tax they pay in other countries where they operate. Using royalties to shift profits is a method commonly used by international businesses to avoid tax.

Lush might argue their tax practices are not wrong, because it is perfectly legal to design payments like royalties so as to lower the overall tax burden on a business; avoidance is legal, whilst evasion is not. However, at least some of their tax planning has been found illegal, resulting in fines in some cases. Sadly, Lush’s accounts do not explain the scale of the fines they have paid, nor how many times the business has been penalized by tax authorities. This is what they do say:

During the year, we have encountered some enquiries from tax authorities on the tax treatment of some inter-company transactions… in some instances this has included making payments for tax under declared… in some situations we have incurred interest and penalties…

Despite these unanticipated tax penalties, and the big salary for the top director, and the hefty dividends, Lush is a very profitable business. Lush’s sales margins are 61.4%, which means a customer who buys a Â£1 bar of soap is paying for something that costs only 38.6p to produce.

Put into the context of their vitriolic, self-righteous and divisive political campaigns, Lush does not sound like a decent socially-conscious business to me. Anyone who really cares about justice – whether it is social justice or the traditional kind – should buy their bath oils and body lotions from another business. Or better still, they should not waste a single penny on cosmetics and should only buy products and services that they and the rest of the world really needs.