We hear it all the time. Whenever somebody has the bad manners to shout “allahu akbar” before committing murder we hear a chorus of apologists: the killer had nothing to do with Islam. The murderer is somehow automatically expelled from the faith, even though I am sure there must have been some historical Muslims who killed but were still considered good Muslims. The killer is excommunicated through the force of public opinion, even though Western societies allow people to identify their own religion, just as we allow people to identify their own race and gender.

The previous behaviour of the terrorist is deemed irrelevant to any judgement about their beliefs. He may or may not have prayed at the mosque. He may or may not have been able to quote the Koran, or demanded that others be able to do the same. He may or may not have consorted with other Muslims, and been treated as a Muslim up to that point in time. But as soon as he commits murder a magical cord is cut, and he is retrospectively banished from Islam. Not only does he stop being a Muslim, he never was a Muslim. And so, we are denied even the possibility of interpreting terrorism from the viewpoint of religion, because of this insistence that terrorism must have nothing to do with religion.

I wish he would have, somebody would have put something in his head that these are terrorists, these are criminals, these folks have nothing to do with Islam. 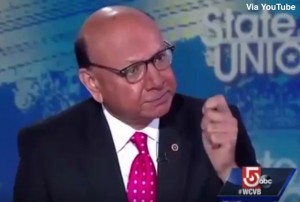 Those are the words of Khizr Khan (pictured), the man who recently stepped up at the Democratic National Convention to slam Republican nominee Donald Trump. Trump responded with his usual flame-throwing, grenade-lobbing antics, which further upset Khan and the people who think like him. Trump is a jackass, but that does not excuse the arrogance of Khan. Being the father of a dead soldier is not a qualification that entitles someone to pronounce who is, or is not, a Muslim. Nor is being a Muslim sufficient qualification. The followers of ISIS think of themselves as the best Muslims, and best placed to judge the religious virtues of others. Some in the West may applaud a rhetorical technique which begins with “I am a Muslim; he is not a Muslim,” but anyone with sense can see how flawed and unpersuasive that is. It invites an obvious response from those accused: “No, I am the real Muslim, and you are the kafir.”

There have been other ways to apologize for Muslim terrorists. We were told they did it in response to cartoons or books or films they found insulting. We do not hear the “provoked by insults” apology much these days, because it has become impossible to find excuses and scapegoats for all the violence meted out in the name of Islam. But back when provocation and insults were the preferred rationalization of terrorism, the excuse was that it definitely was something to do with religion, and that the terrorists were ‘fanatics’ or ‘fundamentalists’, which is quite different from asserting they are non-Muslims. The argument was that millions of Muslims are entitled to be upset if their opinions are satirized and their prophet mocked, so the violence of Muslims is mitigated, if not fully justified. We hear that argument much less these days, because now we are supposed to believe the opposite: it is not understandable to respond with any violence in any situation, because only a non-Muslim would ever respond that way. And yet, Muslims do engage in violence, at many levels, and every day.

Would Khan tour the country of his birth, to give lectures saying those who commit honour killings are not Muslims? Would he defend the rights of religious moderates gunned down by extremists, saying the moderates were Muslims but their killers are not? Would he actively campaign against the country’s blasphemy laws, where the highest penalty for insulting Islam is – you guessed it – the death penalty? And would he campaign for the repeal of this barbaric law by arguing it is against Islam? Maybe Khan would, if given the same kind of opportunity and encouragement that led him to speak at the Democratic National Convention. But if he did so he would be risking his own life, and he knows it. So who threatens his life, and who engages in all that violence, if not Muslims? Is Khan saying that millions of Pakistanis are merely pretending to be Muslims? And what exactly qualifies him to judge their faith, and prevents them from judging his?

When a guy slashes the throat of a priest, we can still find YouTube videos that provoked them, but they are always of the wrong sort: made by Muslims to encourage the murder of non-Muslims. The incitement to hatred cannot be denied, which means apologists can no longer claim that the inflammatory and intolerant behaviour of non-Muslims is the root cause of Muslim violence. Many tolerant people were gunned down in Orlando, run over in Nice. Realizing the old excuses have been neutered by the truth of Muslim violence, the apologists have resorted to the ultimate rhetorical device, oft adopted by those with closed minds: they will simply redefine words to ensure their meaning supports the desired outcome. They pretend a large group of people includes no trouble-makers, by redefining that group to exclude any trouble-makers. It is another example of how some think language is more important than reality. If a Muslim kills, then just redefine them as a non-Muslim, to logically prove the notion that no Muslim kills! It hardly matters to these linguistic connivers that they have won an argument by turning it into a meaningless tautology.

It is breathtaking that some cannot see the inconsistency in modern progressive arguments. They allow self-described Muslims to be redefined as non-Muslims, because their actions were evil. At the same time, they will agree to the notion that gender is different to sex, because anyone can choose their own gender and there is no wrong choice. How can anyone sincerely believe that gender is a subjective choice of the individual which has nothing to do with the physical truth of their own body, whilst simultaneously asserting that the religious beliefs of a person can be categorized and labelled by a third party? The source of this inconsistency is plain: some people want the votes of both Muslims and the transgendered. They do not care about the absurdities and trouble that must follow by trying to indulge both without forcing either to compromise their beliefs.

With that in mind, I want to propose four other arguments in the style of those who say terrorists have nothing to do with Islam. All these arguments are wrong. By being wrong, it should be plain that some are just picking and choosing the arguments to suit the conclusions they like.

These four arguments are nonsensical and wrong. Any decent person would skewer these arguments without hesitation. It is time that the apologists for Muslim violence to be held to the same standards as the rest of society, and have their wrong-headed arguments skewered too. I do not care if the apologists are peaceful, or good Muslims, or the parents of honoured soldiers. The argument that no Muslims are responsible for the spate of current terror attacks is not just wrong, but morally indefensible. It denies responsibility, when every person has a moral responsibility to promote virtue to everyone around them. However you want to label the terrorists, if they mingle with the Muslim community then the Muslim community has the obligation to influence them to be better people. They will not do that by disowning responsibility.

We do not make the world better by averting our eyes from simple truths. That is why we do not indulge men or whites when they complain that not all men are rapists, and not all whites are racist. Of course not all men are racists, and not all whites are racists, but some are. There are also racist blacks and women who engage in sexual violence too. We must confront all evil, whatever shape it takes, and whoever is responsible. Not all Muslims are terrorists, but some are. Any morality that pretends otherwise is morally bankrupt, and should be denounced.