An article in the Guardian epitomizes what is wrong with so much reporting about the current row about minorities being nominated for Oscars.

Will minority viewers â€“ 38% of the population but responsible for 46% of movie tickets sold in the US in 2014 â€“ tune out when it comes to awards and speeches by a parade of white nominees?

The statistics are correct, but what is not mentioned is that Blacks are only 12 percent of the US population, per the 2010 census. There is no way you would infer that by reading the article, which refers to a stream of black actors, but not a single individual of Hispanic or Asian origin. Here is a list of every person referred to in the article, however obliquely, in the exact order in which their names appear, including duplicates. I also add an admittedly crude note about their race, adopting the categories used in the US census:

*The US census treats being Jewish as a matter of religion, not race.

Given that the row and the article are both about statistics and representing ethnic groups proportionately to how often they appear in the population, I find the skew to be staggering. Blacks are a minority amongst minorities in the USA. After Whites, Hispanics and Latinos represent the second largest race, comprising 16 percent of the population per the last census. Although Hispanics and Latinos outnumber Blacks by roughly 4 to 3, this article seems to suggest they have nothing to say about the race row. Furthermore, no individual Hispanic or Latino is considered worthy of a separate mention, even though the piece lists several black actors who presumably are thought to be award-winning calibre.

This is a row where the numbers of Hispanics and Latinos are being appropriated to make a point, but no individual amongst that group is considered worth mentioning. That seems hypocritical to me, and I doubt it is because the author is ignorant of the statistics. After all, the article is replete with stats:

…the Academy of Motion Picture Arts and Sciences failed to nominate a single minority actor for the second year in a row.

â€œMinorities are making little or no progress yet Latinos go to more movies than any other group, and African Americans watch more TV. Yet most movies and TV shows are less than 10% diverse,â€ says [diversity expert Dr. Darnell] Hunt.

… films do better at the box office if two or three of the top eight billed actors are non-white â€“ yet minorities are under-represented by a factor of nearly three to one among lead roles.

There is a repeated tendency to conflate being black with being a minority. But in this context, black is not the binary alternative to white. The statistics are all couched in terms of minorities, whilst only black actors and celebrities are held up as examples of what it means to be a minority.

A Black academic, Dr. Darnell Hunt, is quoted at several points. Whilst I do not doubt Dr. Hunt’s competence, it is telling that the piece relies on a black man to speak on behalf of not only minorities, but also for women. Why is every aspect of this debate being condensed into a mushy, ill-defined discussion about ‘diversity’, when the Academy of Motion Picture Arts and Sciences already runs a gender-discriminating award system, which ensures female actors receive the same number of awards and nominations as male actors?

Pictures paint a thousand words, and the photographs which accompanied the article also tell the same story. This image was used by the Guardian to front their piece. 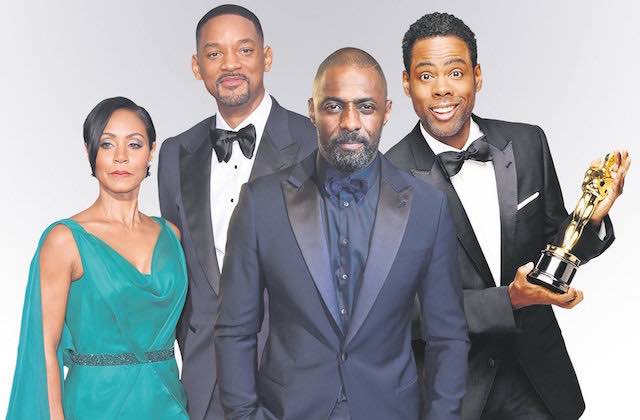 There are four faces, all Black. A good argument can be made for showing Rock and the Smiths, but was it necessary to super-impose Idris Elba too? If it is such a disgrace that neither Elba nor Will Smith were nominated for the best actor, then why no outrage over the lack of other minority nominees, in either the male or female categories? Why is there not a single non-Black face in any of the photos that accompany this piece about diversity? And why is the only woman who is photographed the spouse of somebody supposedly deserving a nomination?

I dislike categorization per race, as it tends to be over-simplistic, and almost always used to skew arguments. Take this egregious example from the article:

Even if this is â€“ as some have argued â€“ an accident of bad timing, the tradition-bound institution has sleep-walked into the diversity issue in the midst of a neurotic, election-year referendum on the nationâ€™s first black president.

President Obama had a white parent and a black parent. However, he is routinely labelled black for the convenience of those making a cheap, but inaccurate, point about racial diversity. More importantly, this argument of a ‘referendum’ on the ‘black’ president neither stands up to scrutiny, nor fits the topic supposedly being discussed by the article. If voting ‘for’ the outgoing Democrat President – an absurd notion in itself – is also a vote for diversity, then why are three of the remaining contenders for the Republican nomination from minorities? Every Democrat who entered this year’s nomination race was white, including the ones that have already dropped out. The author’s imagined referendum on diversity may feature a Republican from a minority versus a white Democrat. Furthermore, two of the Republican contenders, Ted Cruz and Marco Rubio, are Hispanic and Latino. So why does the author lazily imply that the pro-Obama vote is the pro-diversity vote, whilst Hispanics and Latinos should vote as a uniform bloc with Blacks?

Despite the author’s feigned concerned for diversity, it is clear who is most guilty of sleep-walking through clichÃ©d arguments about race.

The article closes with one of those clever-clever final sentences that poor writers adore:

The awards show is a lens on the industry: and that, in large ways or small, is a reflection on America.

What a shame this piece was so badly out of focus!