[Opening Credits. Cut to a man sitting at a bar, nursing his beer. A large television hangs from the ceiling, at the far end of the bar. The news is on. The newscaster’s voice is barely audible, but sounds increasingly agitated.]

Man at the bar: Hey! Turn up the sound!

Man at the bar: The news. Turn it up. Something’s happening.

[The waitress looks for a remote control. Finding it, she turns it around in her hands and finally points it at the screen. The television volume rises until it is clearly audible. The camera zooms in slowly as the anchor man speaks, until we see only the screen, and his shocked face.]

News Anchor Man: Like I said, we’ve not been able to verify these reports coming to us from Stonebridge, Wyoming, but witnesses on the ground are saying that the zombie apocalypse has begun/a UFO is hovering above the town/there has been an outbreak of demons who have escaped Hell via a pan-dimensional rift/a giant lizard has eaten the mayor and most of the local police force/supervillains are running amok in the streets*.

[Cut to the faces of the man in the bar and the waitress. They look upset and anxious. This reaction shot is needed because we assume the audience is so dumb they cannot judge this is bad news for themselves.]

Man at the bar: God help her. God help us all.

News Anchor Man: And now, here is some video footage of zombies/UFOs/demons/lizards/supervillains* that looks like it was recorded by somebody holding a crappy mobile phone whilst shaking violently with fear. [Because that is a good way to tease the audience and build dramatic tension whilst keeping the CGI budget manageable.]

There was a time when you had to watch the TV news to see TV newscasters. Now they appear on the big screen too, in every other film. And most TV dramas set in the present day also feature obligatory scenes where we watch the characters, as they watch the television. Both we and they allow ‘the news’ to inform us of crucial plot developments. And increasingly the actors who play the characters are not just watching other actors pretending to be newscasters. Instead, we see real newscasters, acting just like they act when reading the news. In movies, we have now seen everything from the BBC’s Jane Hill describing the war against aliens in Edge of Tomorrow to Fox’s Bill O’Reilly commenting on the behaviour of Iron Man. It seems news presenters are as likely to have a Hollywood agent as an education in journalism.

Telling a story can be difficult. Audiences want excitement and drama without wading through exposition just to understand what is happening. But the contrivance of using TV news to present information in a fictional story has become an overused absurdity. Have some filmmakers forgotten how to tell stories without taking the short cut of having somebody in a suit, sat at a desk, reading out text? It seems so. This begs a question: if they must rely on a speaking head to tell us what is happening, then why not simply employ the ages-old technique of employing a narrator?

There was a time when the technique of incorporating ‘factual’ news presentation within a fictional story was fresh and original. Orson Welles’ use of a news reel to relate the biography of Citizen Kane stands out as an example. 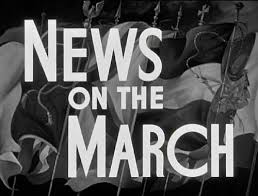 However, Welles was not simply throwing facts at the viewer. On the contrary, the film opens with the newsreel announcing Kane’s death because the rest of the film shows how straightforward biographical reportage is inadequate to convey the nuances of a person’s life. At the same time, Welles is critiquing the idea of news reporters as impartial, neutral middlemen. Kane’s character is a newsman, amongst other things, and the film repeatedly explores the relationship between the truth and the way ‘facts’ are presented to an audience.

Compare Welles’ sophistication with the brutal stupidity of how the ‘news’ is incorporated into the plot of most modern films. The viewer is meant to uncritically accept the truth of anything shown to them. Are audiences really so trusting? In real life, news can be biased, and audiences can be sceptical. Treating TV news as an authoritative and flawless source of information is as much a fictional construction as dinosaurs in New York or alien visitations. It comes as a relief when the zombie rampage/nuclear holocaust/viral pandemic takes the final broadcast station off the air. From that moment, the filmmakers can concentrate of their job of telling a story about characters, what they do and how they respond to events. The obsession with presenting pseudo-factual information is to storytelling what a Wikipedia article is to a novel. Some people may choose to read Wikipedia articles for pleasure, but such entertainments should not be confused with the art of storytelling.

Filmmakers, in particular, should do a better job of telling stories about how the ‘news’ is merely another kind of storytelling. They appreciate that editing is a crucial element in the construction of their story. This is also true of factual news, where editing – deciding what is included, what gets cut, which elements are accentuated, how pieces are assembled and related to each other – determines the narrative presented to the audience. News is not a transparent window, overlooking a world of fact. On the contrary, news is an exercise in manufacturing stories and distributing them to audiences that want to hear them. In that respect, factual news shares much in common with fictional storytelling, and this analogy is underlined by the popularity of movies which were ‘inspired’ by actual events.

At its best, film can force us to rethink the relationship between the audience and the ‘facts’, encouraging us to be more critical about how events are presented to us. In Medium Cool, Haskell Wexler employed the techniques he learned as a documentary maker to slice into the objectivity of TV news reporting. The film famously concludes with fictional scenes filmed amidst the real riots around the 1968 Democratic Party convention. Network presented a biting satire about television news and how it manipulates audiences, with one newsreader delivering a notable catchphrase in the process: “I’m as mad as hell, and I’m not going to take this anymore!” The Insider allowed Director Michael Mann to draw out two extraordinary performances from his lead actors, with Russell Crowe as a former tobacco industry executive trying to tell the truth to the public, and Al Pacino as a veteran TV news journalist who has to wrestle with an industry which is susceptible to intimidation and backsliding like any other.

Most recently, Jake Gyllenhaal gives an extraordinary performance as a self-employed ‘nightcrawler’, in the 2014 film with that title. He makes money by filming car crashes and crimes, then selling the footage to the TV news. Gyllenhaal’s character approaches his work like he has degrees in business administration and sociopathy, calculating how to be first on scene, and cooly appraising which events audiences will find most shocking.

The makers of Nightcrawler and these other films deserve thanks; they use their narrative skills to explore the truthfulness of a parallel industry. But their good work is undone by other filmmakers who use TV news as a lazy mechanism to push their story forward. Our filmmakers, and our storytellers, let us down when they repeatedly treat news coverage as a simple conduit to fact. They should know better, and so should we.