Sometimes, on a journey, you pass a point of no return. Committed, you must soldier on. I have passed that point with my film project. However good or terrible the final film will be, shooting is underway. Whatever is filmed will get edited into a short; and somebody other than me will see it. There is no going back now. The stakes are high. At risk is my mental health and the goodwill of both actors and crew, all of whom gave up their time for no other reward than taking part. I can only tentatively speculate about the potential gain. Maybe the gain is the pleasure of creating something that others will like. Hopefully the gain will be creating something that I like. If someone else likes it too, my expectations will be surpassed.

So why take the journey? I could blame Stanley Kubrick. Yes, I know it is corny to emulate the notoriously eccentric cinematic genius, but in my defence, I have no intention of emulating him except in the most indirect way. He made films that helped people look at the world a little differently. 2001, Dr. Strangelove, Lolita, A Clockwork Orange, Full Metal Jacket. They all left an indelible mark on the retina. To know the world can be seen differently is enough inspiration. If films only help us see the way we already do, we might as well just look out of the window.

“What is the style of your film?” asked one of the Doha Film Institute mentors. I was unable to answer. I know what the film looks like in my head, but I rejected the only answer on offer: “my style”. It would be pompous to claim I have a style. I will direct what I direct; others can look at it. Let us leave the analysis there. But vexed by this question of style, I kept thinking about it. After a while, I realized I was going to borrow most heavily from Stanley Kubrick. Sometimes this was conscious – a knowing nod to the great director and anyone who recognizes his work. Sometimes this was not so conscious, but apparent now as I think about it. Here are four ways I hope to take from Kubrick’s cinematic lexicon.

Quite by accident, I found that I wanted a lot of scenes to utilize a reverse zoom; starting on a close-up and then broadening the field of view to a wide shot. My instincts tell me that this makes the viewer consider the particular vs. the general, the individual vs. the context. Kubrick uses the technique in his films. Take a look at this clip from Barry Lyndon. There is a shot, about 20 seconds into the clip, where we start by looking at Lyndon marching, and reverse zoom to see him marching in step with the rest of his regiment. It emphasizes that Lyndon, like his fellow troops, is still a single man, even amongst the many. Cinema audiences are spies. They observe the events taking place, often without comment on their role as voyeurs. There is hence an irony in showing them an eye, which also looks on at the events that unfold on screen. Kubrick’s definitive eye is found in 2001: A Space Odyssey; the ship’s computer, HAL 9000. 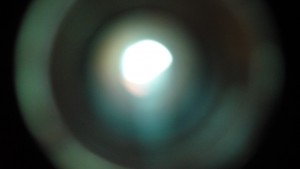 In a knowing homage to Kubrick, I will use the peephole of a door in place of an eye. It implies the potential to be watched, without the observed knowing if they are. This is how a peephole looks, when seen close up and lit from behind… It is amazing what effects you can generate without CGI. Ask somebody to tilt their head forward, roll their eyes upwards as far as they can, and look into the camera. You have the Kubrick stare. Kubrick uses it to denote a kind of malevolent insanity. In a riff on how he uses it, I will ask actors to mimic the movement, but weave it into a natural motion, leaving the audience to decide if the character is mad, bad, or just tilting their head forward and rolling their eyes upwards. Here is a classic example of the Kubrick stare, by Malcolm McDowell in A Clockwork Orange.

There is something alien about corridors. The space is unnatural. Human beings evolved to live on the plain. Even in a cave, you never find a space like the rectangular shard of a long straight corridor. Corridors are literally cross-sections of reality. Whilst convenient, they are dead space, that join together living space. I had this very much in mind when I began writing the screenplay, which features a character that loses their own sense of space and time within a labyrinthine apartment building. Corridors also make us aware of the possibility of many other lives around us, even though they are out of view. Only recently I remembered that Kubrick makes use of corridors in his films, also creating a sense of the eerie and alien. See below for the best known example of Kubrickian corridors, from The Shining.