In the 1960’s and 70’s Mel Brooks and Carl Reiner performed a series of comedy interviews, often ad-libbed, with Mel playing the part of a 2000 year old man. In one interview, Reiner asks which country the 2000 year old man is from…

B: We weren’t nations, we was caves. I lived in Cave 76, a roomy cave with southern exposure and an unobstructed view of Cave 75. Back then a cave was important. It went beyond shelter. It was part of your identity. Every cave was like its own individual nation. We had our own flags and our own anthems.

R: Do you remember your cave’s anthem?

B: Of course! You don’t forget a national anthem in a minute. I’ll never forget ours. My mother wrote it. It had such passion and pride.

R: Could you sing it for us?

The real cavemen may not have composed anthems, but they did paint on the walls. 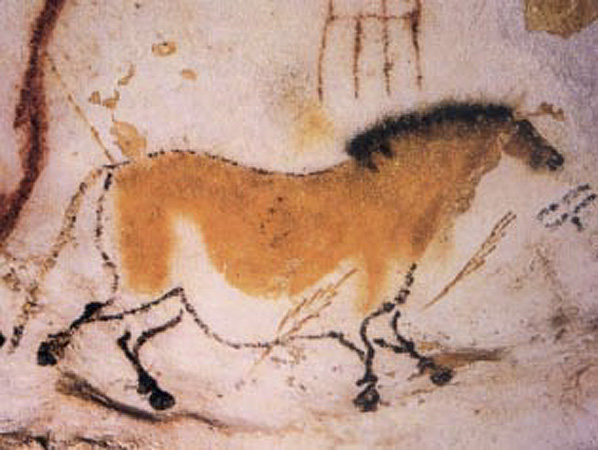 This painting of a horse is from Lascaux in France. The funny thing about drawings like these is that they are often found in the most inaccessible caves. This suggests they were not for public display. Some theories think that the drawings were made by shamen, who retreated to the darkest caves, entered a trance, and painted their visions.

Having caught the blogging bug, I cannot help but notice how many people have launched their own blogs, and not just people with time on their hands. People blogging about their cats, hats and favourite bathmats is fine with me. The subject matter may not interest me, but that kind of blogger must have no illusions that their blog is anything more than a bit of fun for themselves, friends and family. Then there are blogs about the internet, computing, technology… it is pretty understandable that people into the internet will use the internet to communicate about the internet. The group that troubles me is the wannabe celebrity, or the person of substance, or the actual celebrity that uses the blog as a way to augment their fame or reach. There are some surprising people at it. Executives do it for the benefit of their employees. Rock stars do it. Even the CEO of the Institute of Chartered Accountants does it. The motivation seems to be that the blog is the internet equivalent of newspapers, television and radio – a communication tool designed to reach many people. But whilst their blogs can reach many people, your neighbour’s blog about her cat is just as accessible. So why would the elite, the semi-elite and the demi-semi-elite post their musings to the great leveller, where the thoughts of kings and commoners are equally likely to garner love and contempt?

It is impossible to know for sure why anyone does anything, but my guess is that blogging by the semi-elite (or rather the ghost writing of their blogs because of a certain lack of time/humility/imagination/writing skills) is a fashion that will fade. It offers the promise of strengthening an audience, a following… whatever motivates the semi-elite to climb up the their elitist ladder. But it is also a tedious chore. You have to write something on a regular basis. Because the aim is popularity, it has to encourage people to like you. And it has to say nothing that might make people like you less. In other words, you have to write a lot of things that are both bland and interesting at the same time. Guess what? It cannot be easily done. Pretty soon after most of these blogs start, you can see them tail off. The first post is the “first post” where the author desperately explains why they started blogging, without really admitting that it was born out of vanity. A few posts later and the rot sets in… the author is bored, and short of ideas and the posts get more and more sporadic. Eventually they stop altogether. The only reason they keep going as long as they do is to avoid the embarrassment of the blog’s early demise. You can sense the disappointment as the blogger realizes that what started as a mild curiosity not only failed to grab the attention of the majority, it no longer even holds the interest of the minority. So where did they go wrong?

The problem with popularity is that not many people can be that popular, just like not every tune can be an anthem. A few simple messages may strike a chord with the mass, which is why Brooks’ message of “let ’em all go to hell” is not only funny but an apposite criticism of nationalism. For creative works to stand out from the crowd, they must be special. Their specialness may be because they are unique. Just as often, a creative work that seems little different to many others is arbitrarily selected for promotion. For example, national anthems tend not to be remarkable songs. They are special because they get selected, and they get selected because they are not remarkable. National anthems are the equivalent of the winners of Pop Idol and Big Brother; they represent an idealized version of ourselves (or at least of the people who care about such things).

Individual blog posts are not special but they may be unique. They are a stream of consciousness. They are like waking dreams, produced in a trance. They reflect the rich inner life of the blogger, not the superficial outer life of society. Blog writing is inspired by the darkness of the cave, not the bright lights of the stage. Only by accumulation over time does the blog become a work of meaning and substance. The writing of a blog comes from compulsion, like the shaman’s need to capture his visions. Compulsion may take many forms, but its direction is determined by the source, not from an ulterior aim. I am compulsive too, which is why I believe this blog will last. This is my inner life, to be suitably logged, blogged and scrawled on the walls of my virtual cave. It can be accessed by those willing to find it, but none of its content aspires to popularity. These are halfthoughts. They represent the waking dream that is a life. Perhaps none of these posts will ever mean that much, but perhaps, when strung together, they make for a work in progress. Much in the way that life is a work in progress. Feel free to come back and see how it progresses, if you like.